March 22, 2020June 26, 2020Coronavirus, Health insurance, Medical Insurancecoronavirus, COVID-19No Comments on COVID-19: 8 REASONS NOT TO PANIC
Neurosis is bursting globally and the reason is an invisible microorganism, which moves through the air and can “jump” up to six feet, highly contagious and for which there is not yet a vaccine: the coronavirus that causes the disease named COVID-19.In less than 3 months, the virus spread to more than 60 countries, and has affected the economy of more than 150, and infecting hundreds of thousands. It definitely sounds alarming.However, experts want to reassure something: we don’t have to let panic invade us, and here are 8 reasons from the experts that support that:

1. The origin of the outbreak was immediately known:

Within seven days of the official announcement that a new virus was generating a strange pneumonia in China, it had already been identified as part of the coronavirus family (called like that because they’re crown-shaped). It was soon known that it was from the same family of viruses that generated severe Respiratory Acute Syndrome (SARS) and Middle East Respiratory Syndrome (MERS) years ago. Although it doesn’t act the same as these two, this information helped scientists begin to understand it.

2. A test was quickly developed to detect it

As of January 13, its genetic sequence had already been generated and a test developed to diagnose it. The first test was conducted in Germany and was immediately sent to China. Now there are dozens of tests all over the world.In the US, even before the Centers for Disease Control and Prevention (CDC), the University of California in Davis had developed a test that had almost immediate support from the Food and Drug Administration (FDA).

3. The recovery rate is high

As of March 9, the map of Johns Hopkins University monitoring the spread of COVID-19 in real time recorded that more than 62,500 people had recovered.

4. It’s not so easy to contract

Although the increasing numbers seem to show that the coronavirus that causes COVID-19 can spread at the speed of light, the truth is that it is not so easy to contract it. Washing your hands often—not just getting wet—with soap and water is the most effective way to prevent the virus from spreading.To be at high risk of contracting the coronavirus, you need to live with, or have direct physical contact with someone infected, cough or sneeze (or pick up a used tissue), or be face-to-face, in a space of two meters, for more than 15 minutes, with someone who carries the Virus.

5. Prototypes of a vaccine are already under way

A dozen laboratories and academic groups, including the University of Queensland in Australia, are working on a preventive vaccine. But we can’t generate false expectations; we first must prove its effectiveness and safety.Dr. Anthony Fauci, director of the National Institute of Allergy and Infectious Diseases, said the entire process to approve and distribute a vaccine can take a year to a year and a half.

6. Drug-based treatments against known illnesses are already being used

While the scientific community is seeking effective treatment for tens of thousands of ill patients from the new respiratory virus, surprising remedies are being tested: Drugs that fight well-known killers such as HIV, Ebola, and malaria.When a new virus arises and endangers large numbers of people, scientists sometimes turn to existing medicines that can be re-adapted. Medicines available in the United States have already undergone rigorous testing to prove they are safe, thus avoiding the need for costly human testing to assess their safety in an emergency.Although they are not precise treatments for COVID-19, they can help relieve symptoms while developing the necessary treatment.

7. The Coronavirus can be cornered

The quarantines imposed on entire regions of China seem to have worked. The spread has definitely stopped, and in recent weeks, in fact, China has seen fewer, and even none, cases in some areas. Italy continued to take a similar measure, first in the north and then throughout the country. In other countries, different levels of social isolation and distancing are being applied.This shows how effective teamwork can be against an invisible enemy like this. Following the recommendations of voluntary self-isolation can help stop the spread more than we can imagine.

8. You’re not alone against Medical Expenses arising from the COVID-19

Although Pandemics and Epidemics are excluded by ALL Health Insurance Companies a part of the general exclusions of the health insurance industry, a few insurance companies have stepped up and announced that they’ll cover their current and new clients or all expenses related to COVID-19 including testing.The titanic decision of disregarding their own general terms and conditions and be willing to take this risk showed the country the commitment these insurance companies have towards the same goal: stop the virus from spreading and affecting more people.[/vc_column_text][vc_column_text]If you don’t know if your health insurance policy will cover you against COVID-19 or are looking for a company that does, please contact our team at Guardian Insurance MX or request information via email at: https://guardianinsurancemx.com/mexico-health-insurance/ 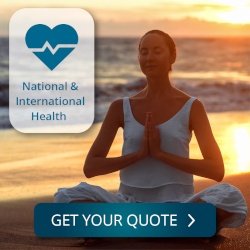